Day 11 was our last day in Taipei as we had to get up early the next morning to catch our flights to Japan so we spent the morning packing up before heading out to Taipei for some souvenir shopping and a last view of the city.  As we packed, we turned on the television for the first time and found the historical drama soap operas that were playing completely mesmerizing.  We couldn’t understand a word, of course, but that didn’t stop us from making up the plot as we went.  I have no idea what we were watching but we ended up dubbing the 2 shows, The Saga of the Ugly Belt and Palace Drama.  We’re pretty sure we nailed it.

Before heading to the HSR station for our last ride from from Zhubei to Taipei, we headed for Starbucks for a caffeine fix. 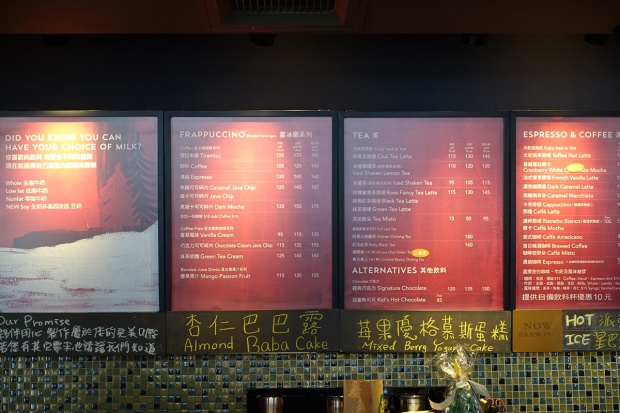 Now, back in San Francisco we rarely go to Starbucks because, frankly, there are far more coffee choices available with much better coffee.  However, we have found that Taiwan is not a coffee country and, after sampling several coffee shops in the area purported to be “the best” where we were served blood-curdlingly burnt and bitter coffee, we ended up caving in a couple of days ago and tried Starbucks.

If anyone from Starbucks is reading this, I hope you will accept my apology.  I turned up my nose at Starbucks coffee in the U.S. but here in Taiwan your coffee is ambrosia.  I was wrong.  Starbucks is awesome.  Thank you for bringing a proper cup of coffee to Taiwan.

We didn’t sample any but here is a picture of the baked goods case at the Starbucks. 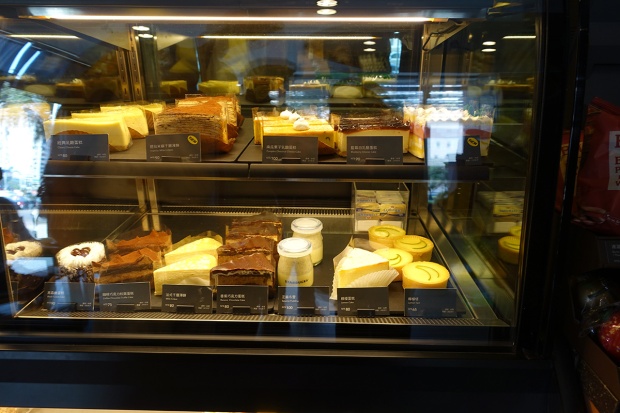 It all looked very delicious.  Another cool thing about this Starbucks was that, not only did the baristas speak English, but instead of writing our names on the cups, they wrote “E” for “English” so when our order was ready, they announced the lattes and mochas in English for us.  Super cool service!  After this trip I can honestly say that I love Starbucks. 🙂

Drinks in hand, we hailed a cab and headed for the Zhubei/Hsinchu station.  I may have mentioned in a previous post that the station is fairly new and it’s of modern design.  Here is a view from the waiting area. 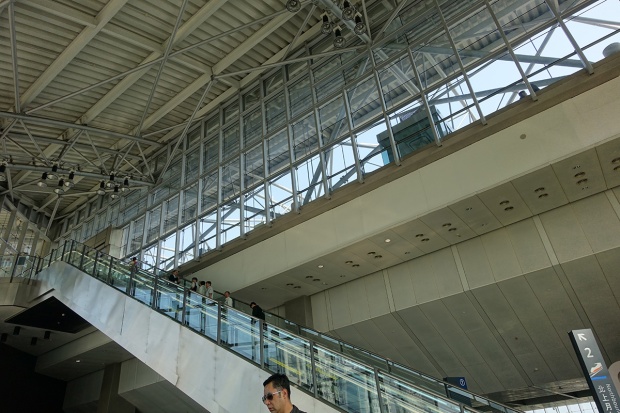 It really is an impressive rail station.  It only serves the HSR as well – no local trains here.  I finally remembered to get a shot of the train pulling into the station, too. 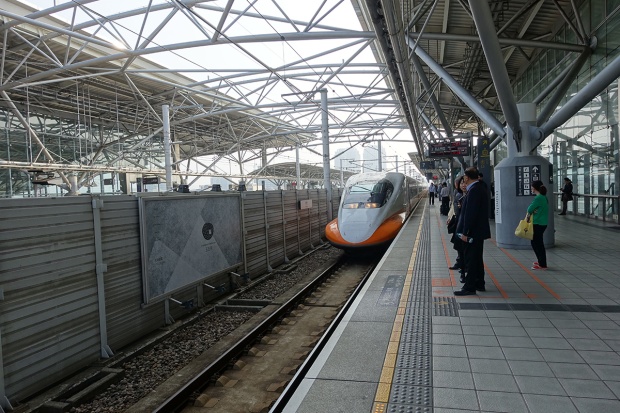 When we arrived at the Taipei Main Station, we headed east on Zhongxiao East Road to make our way to the bakery recommended to us for their pineapple cakes.  It’s located about 4 stops on the Metro from the main station but as it was a nice day and we were joined by one of our host’s childhood friends who hadn’t seen Taipei yet, we decided to walk it. 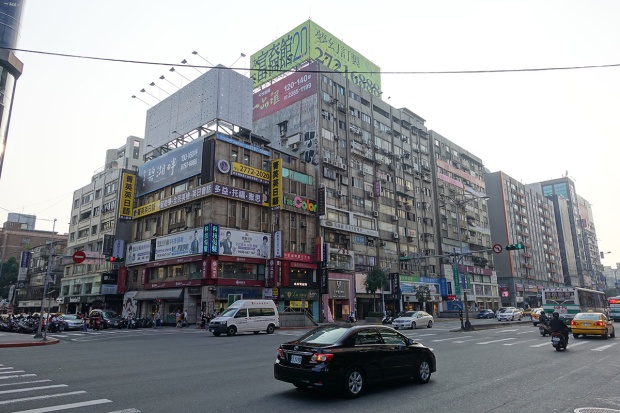 It was a great thing that we did, too, as it allowed us to see that many of the places we had been before were on this main road.  We had previously taken cabs or walked from different areas so we didn’t realize that most things were on this road.  Our host, who speaks some Chinese, was away for the day but we managed to get around ok.

After picking up multiple boxes of pineapple cakes, we stopped into coffee shop Barista Premium for a rest.  Little gingerbread men were served with the hot beverages. 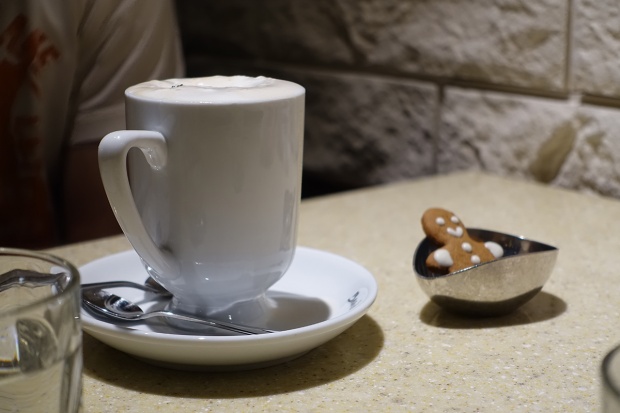 The coffee was ok – not great but not the worst we had (Starbucks still wins by a landslide) but what the coffee lacked the cafe made up for in location, ambience, and friendly staff. 🙂

As the sun set, we headed back towards the station to meet up with our host. 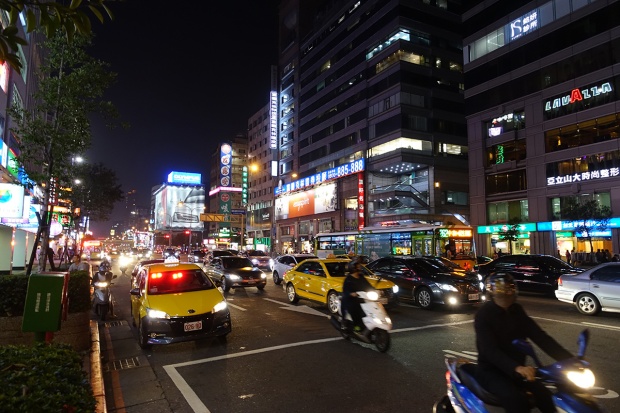 The lights and traffic in the area made us border on sensory overload but we made it through to meet our host and visit a tea shop where we could pick up some specialty teas to bring home. 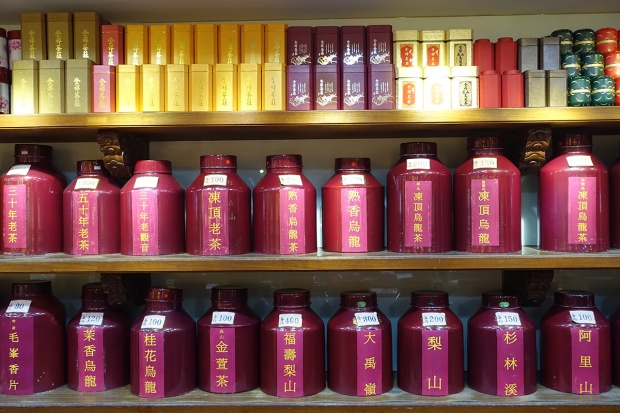 At first, the proprietor was not inclined to let us sample the teas but I found out that is because lots of Chinese tourists tend to stop in, ask for samples, and then leave without buying anything.  I can’t say that I blame him for being wary of anyone just wanting to try the tea.  We made it clear that our intentions were to buy and with that we sampled 5 or 6 different teas and each of us ended up buying several varieties.  The proprietor could not have ben more gracious and we were there for over an hour!

Here is a photo I took of the busy street as we hailed cabs for our next destination. 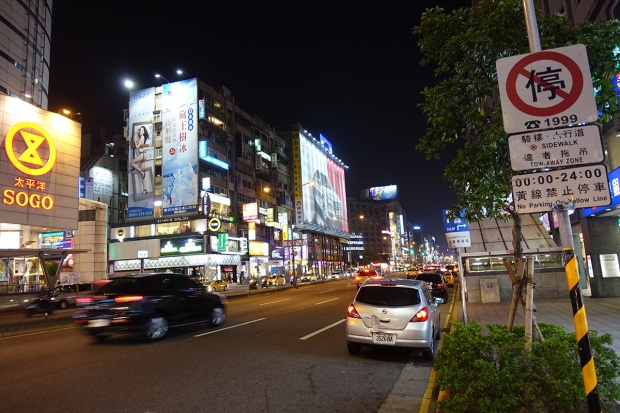 Is it bad that of the large billboards visible here, the one I registered was for Audi?  My cohorts pointed out the one with the female model but that wasn’t the one I was looking at. 😉

Finally it was time to leave and we headed out to the original Din Tai Fung for dinner, which was a fitting end to our trip considering we had eaten at a Din Tai Fung on our first night in Taiwan.  There was a 2-hour wait outside for a table (this is normal) but thanks to my host’s cousin, we were able to get in immediately with no reservation. 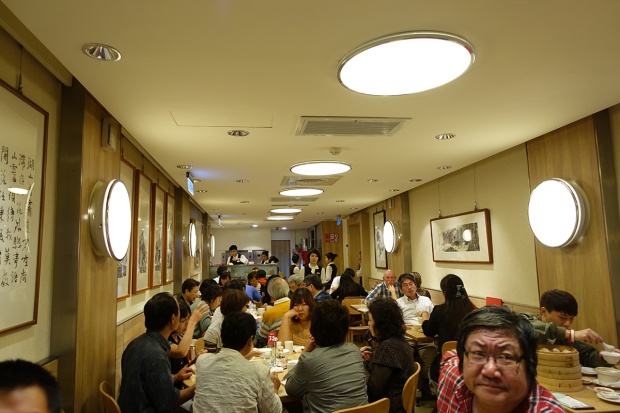 It’s a rather small space that takes up all 4 floors of the building in which it is based.  We started off with the appetizers before the main event of soup dumplings made its way to our table.

We noticed this time that the soup dumpling baskets were served with a piece of cooked dough in them.  We weren’t sure what this was for until we took a closer look: the dough is cut into the shape of the animal from which the meat in the dumplings came.  The photo below shows one in the shape of a crab. 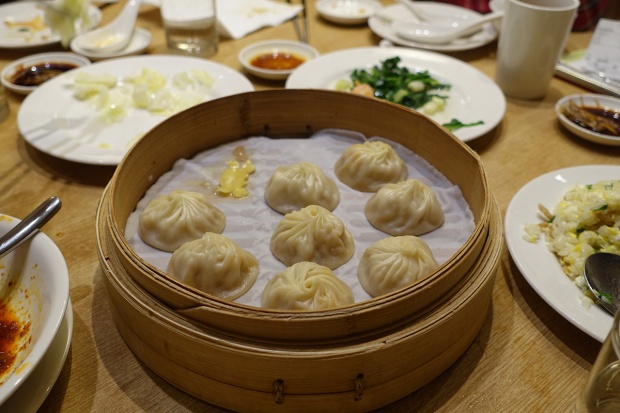 Now, I mentioned in my Day 1 post that there was a soup we had for dessert and I wasn’t sure of what it was called and had no photos to use as a visual reference.  Thanks to a couple of commenters, I understand it is called tangyuan.  Here it is as it’s served. 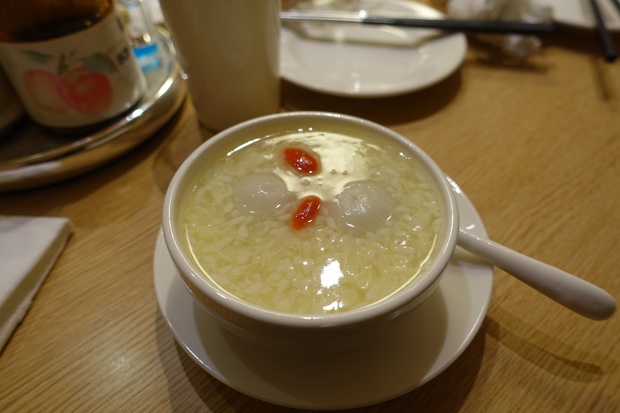 There are 2 black sesame balls floating in the rice soup. 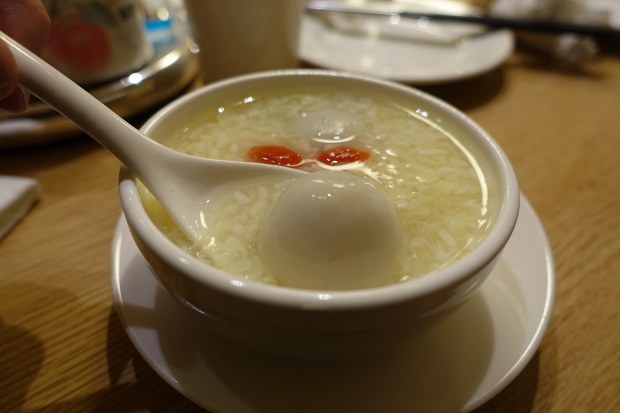 As this is my host’s favorite soup, he recommended breaking open the sesame balls and stirring the contents into the rest of the soup.  here is what the sesame ball looks like split open. 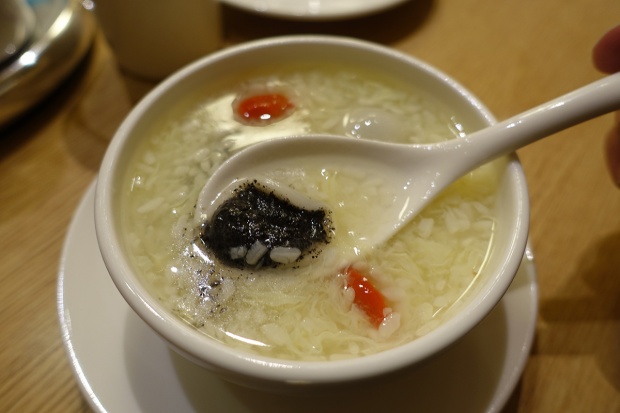 It’s a highly unusual dessert (for me) but it’s good.

After this we headed back home to Zhubei to pack and get a few hours sleep before waking up early to get to the airport.  Stay tuned for posts on Japan. 🙂