Day 12 of our trip to Japan dawned and the realization that the 3 weeks of adventures in Asia was soon to come to an end.  Our flight was to leave in the evening but with the transfer time from Roppongi to Narita, some last-minute shopping at the airport, and the necessary 2-hours-ahead-of-departure arrival at the airport, we had to leave in the early afternoon.

One of our group had some last-minute electronics purchases to make so he headed to Shinjuku early in the morning while I and my other cohort stayed in Roppongi.  Here is a view of the Roppongi Hills shopping center from the ground that morning. 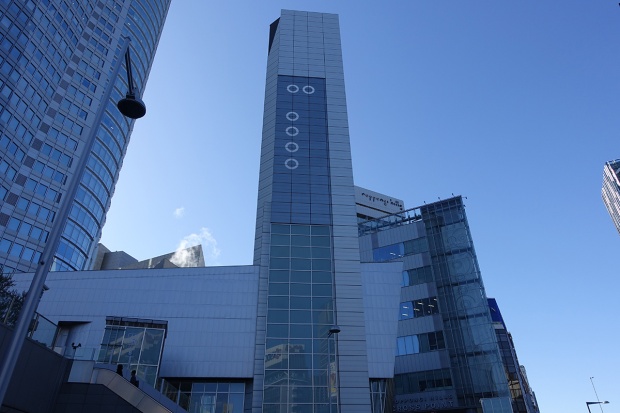 From the upper level vantage point, we could see the sun rising over the city. 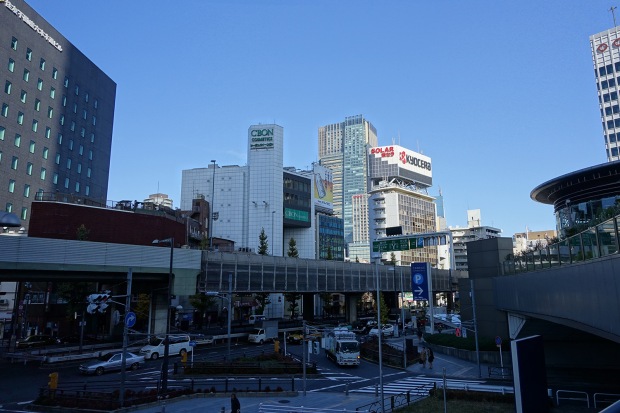 The two of us finally took this opportunity to do something we had wanted to do the entire trip: we sat at a coffee shop (Tully’s – nicest one I’ve ever been to!) and people/car-watched.  I find doing lots of things very rewarding but I also find watching life in a place to be equally so.  It helps me gain an understanding of the people: their likes and dislikes, how they act in different situations, what is important to them, and more.  All by watching.  The second floor of the Tully’s coffee shop was great for that.

While we waited, I car-watched and among the various Porsches, Ferraris, and Lamborghinis (none like the previous night, sadly) that are common in Roppongi, I spied a new Porsche 918 (sweet!) and a bright magenta Lexus (not so sweet).  Well, at least the Lexus would be very easy to spot in a parking lot!

We eventually met up with our friend and his purchases and headed back to the apartment to finish packing.  Here is a view of a traffic tunnel that runs near our place. 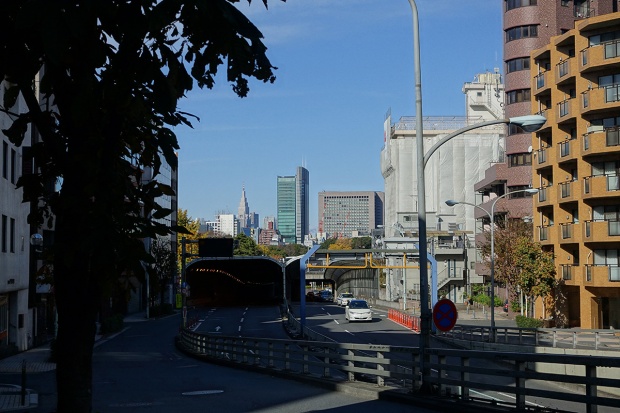 Despite Japan being so densely-populated, the city has made good use of elevated highways and tunnels to help funnel traffic in a more efficient way.  That isn’t to say driving is necessarily the fastest way to get from point A to point B in the city, though.  Even so, we caught a cab to Tokyo Station as it was easiest with all of our luggage.

Surprisingly, the Marunouchi district was crowded with people, which was odd for a Sunday considering it is primarily a business district (we visited on Day 3).  Peaking out of the cab, it appeared everyone was queuing up at the Imperial Palace.

The palace was not open during our previous visit but the doors to the gates appeared open.  Typically, the palace gates are only opened to the public 2x per year and this was not one of those days (the Emperor’s Birthday in late December or the New Year) so what was it?  It turns out that the public was allowed in via the main gate to view the fall colors of the trees leading up to the main building.  It’s too bad we missed it as it must have been quite a sight!

Since there were so many pedestrians out, it took us a bit more time to get to the station but we had planned to get there early so there was no problem.  Here is our last look of the station towards the Kitte building we visited earlier in the week. 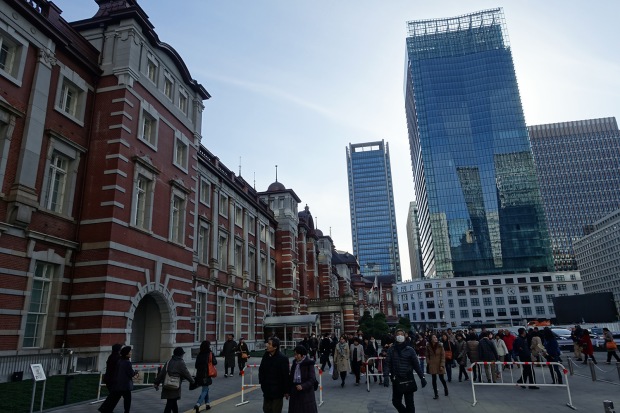 The station was packed with people and it was difficult to move through the hallways but we finally made it to our train, picking up some bentos along the way.  The Narita Express arrived and, to our surprise, cars 7+ were present but cars 1-6 weren’t.  We were supposed to be in car 6! 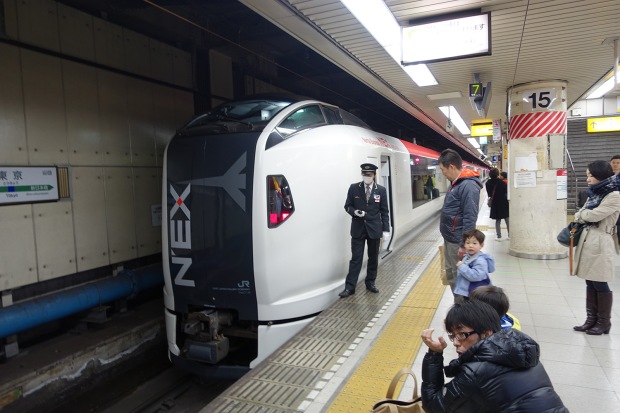 It was then that I remembered on our way from the Airport to Shibuya that the Narita Express train split into 2 when we stopped at Tokyo Station so we would have to wait for the train carrying cars 1-6 to join up with the train that had already arrived.  As we waited, a crowd began to gather with some excited children and adults waiting nearby to see the coupling of the trains. 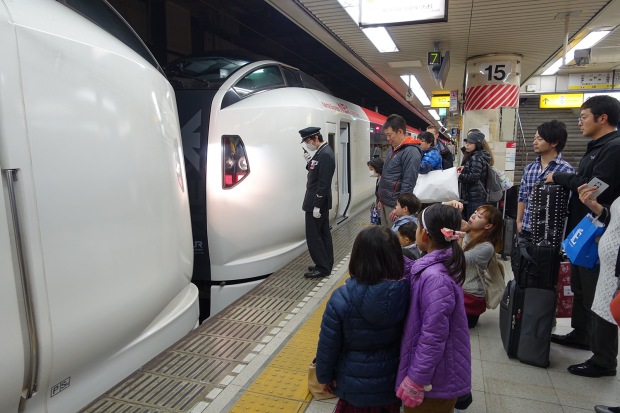 We had our bentos on the train and the three of us alighted at Terminal 1 to spend a bit of time together before we went our separate ways: 2 of us would go on to San Francisco while 1 would go back to Taiwan (Terminal 2, btw).  After picking up the bag I checked at the airport and redistributing souvenirs, we San Francisco-bound travelers checked in and said our good-byes to our partner in crime.  I stopped by the gift shops before going through security to pick up some boxes of Tokyo Banana.  I don’t particularly care for banana flavor but one of my friends loves this sweet so I had to bring it back. 🙂

And with that we breezed through security and immigration and made it to our gate. 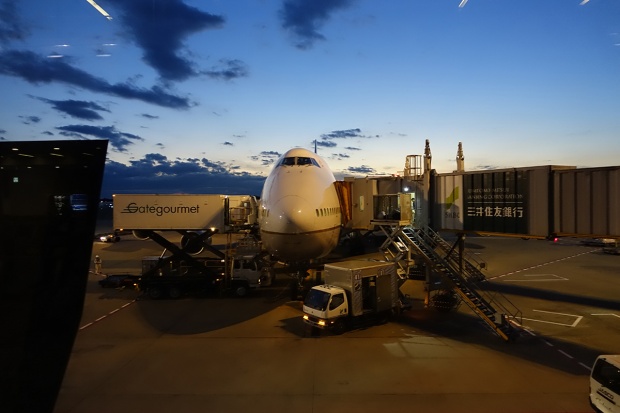 Unlike our flight to Taiwan, this plan had WiFi but there were no power outlets at the seats in steerage (aka “Economy” and “Economy Plus”).  The video system was also a bit old-school in that there was 1 video feed for everyone displayed on monitors at the bulkhead and in small tvs in the aisles.

So, I didn’t opt for the WiFi and instead just used my iPad to play my own movies: The King’s Speech and Redline.  I can’t sleep on flights and, like Taiwan, I was up for the duration of this one.  It was a pleasant flight, though.

I have to give a big shout-out to the United flight attendants on this flight.  I had specified that I’m a vegetarian (it’s even tied to my FF number) but for some reason on this trip, that wasn’t registered so no vegetarian meal was set aside for me.  I declined the dinner offer but one of the flight attendants prepared one of the pasta dishes that would be served at the end of the flight for me with the salad, dessert, and trimmings of the dinner option.  Super nice of him and he definitely didn’t have to do it – truly went above and beyond for me, a steerage customer.  The other flight attendants were also very nice – aside from the coffee on our trip to Taiwan, which we didn’t try on this flight, everything has actually been very good with our flights on United this trip.  Nicely done, United!

Fast-forward a bit and we arrived in San Francisco 1.5 hours ahead of schedule, which was definitely ok with us.  I could tell we had arrived at the right place since it was gray outside (we call SF the “Bay Area” but it is also known as the “Gray Area”).

Going through U.S. immigration wasn’t as nice as Taiwan or Japan where the agents smiled and seemed to treat us well.  I count myself lucky that I got a grunt and a, “Head to your right” instruction after some scrutiny over my passport vs my appearance.  I mean, I was tired after the flight but really I can’t have looked that different.  Fortunately, though, the process was quick and the longest wait I had was waiting for my bags to show up on the carousel.  Once they did I headed outside to catch the Airporter to the north bay.  Back in the land of SUVs, minivans, and Priuses.

There were only 4 of us riding the bus and I sat near the driver and we talked for most of the time and together pointed out the bad drivers on the road.  His commentary was similar to what goes through my head, too, when I encounter drivers like that – ha!  We passed this restaurant on the way and, despite my fondness for the Taiwanese food I had, I’m pretty sure I’d have to adjust my expectations in the U.S.

We also passed through Golden Gate Park, which you can see on the right of the photo below.  It’s kind of nice to see drivers on the right side of the road again.

Every workday I commute from the north bay to the city and either pass by the Golden Gate Bridge by ferry or drive over it by bus.  This isn’t a great picture but at least you can see the bridge as we approached it going north. 🙂

Karl the Fog, fortunately, wasn’t in residence at that time so I could see the city of San Francisco and Alcatraz Island from atop the bridge.

I was dropped off in Mill Valley and apparently I had missed some major storms that came through the area since my drop-off place was flooded.  Yikes!  My brother and sister-in-law forded the flood (yay Subaru Forester!) to pick me up and we stopped for coffee before I arrived at home to be reunited with my dog and my Mom, who was taking care of my pup while I was away.  Barely able to stay awake, I took advantage of what little alertness I had left to stop at Whole Foods for groceries before collapsing for the rest of the day.  It looks like I made it in time to see fall colors here, too.

I’ll be adding more thoughts on my trip and some info on the loot I acquired in the coming days.  See you soon!