After our adventures in Lukang the previous day, we got a bit of a late start on Day 5 but we still managed to pack a lot of activities in.  First stop on our agenda was to head to Taipei for breakfast (known as “lunch” to most everyone else based on the time of day) and visit the Nanmen Market.  Our usual guide (our host’s cousin) explained to us that this market is very high-end and that politicians’ wives shop here and this is where people come for important gifts and meal components.  We only visited the first floor and wow was it packed full of Tiawanese specialties.

My German traveling companion says that he could be put into a grocery store here and he would be content for hours looking at the various items for sale that we don’t have in the US or Europe and I quite agree with him.  Click on the images for higher resolution versions if you would like to take a closer look at the items for sale.

Check out the White Coffee mixes.  I have no ida what that is but we just might have to try it.  There were many different dried meats and fruits for sale as well, some displayed and vended similar to how candy is sold in the US. 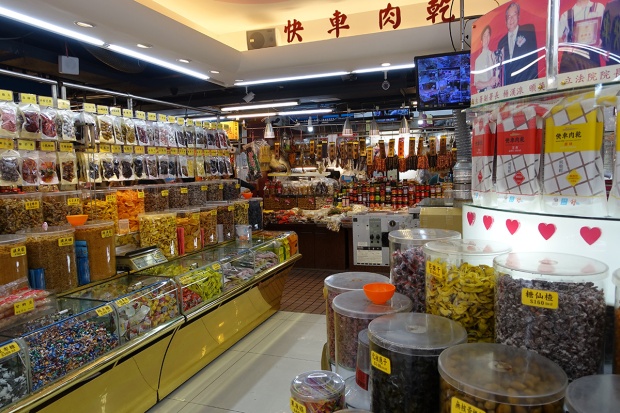 One thing to note is that this market has many different stalls and, although the sellers all wear similar uniforms, each stall is its own store so all payments for goods must be done at the appropriate stall.  Our host didn’t realize this and walked away from this stand with some dried cherry tomatoes only to have the ladies from the stall run after him to ask for payment.  They were very kind and gracious about the confusion. 🙂

After the market, we headed to the nearby Chiang Kai-Shek Memorial Hall as it’s one of those things all tourists in Taipei should see (we can now say we’ve been there and done that).  We entered the complex near the National Theater building and didn’t really now how massive the complex would be until we passed it and reached the Memorial Hall Square. 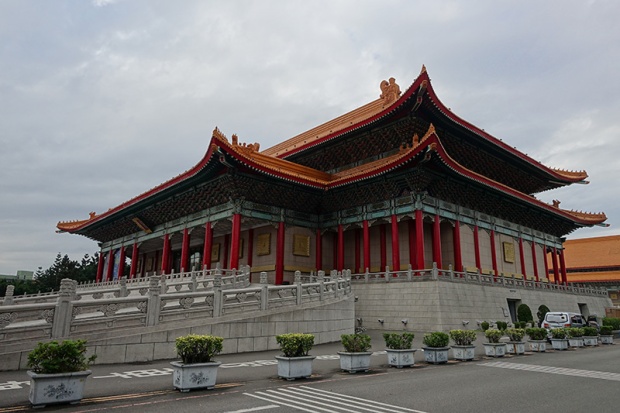 It is truly a massive complex.  The building shown below is the memorial hall.  What really amazed us about this complex is that it was opened in 1980 as typically such large monuments are holdovers from a more distant past. 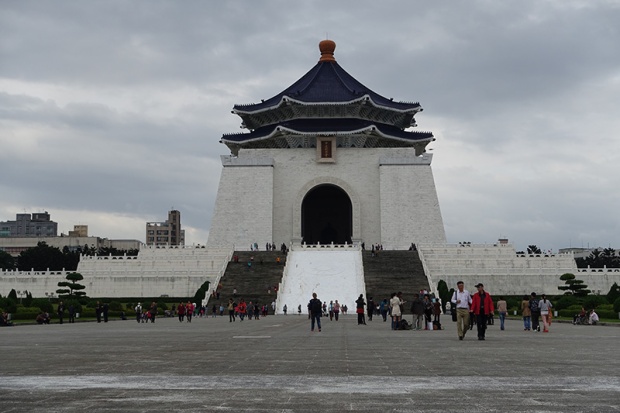 In the hall, an enormous statue of Chiang Kai-Shek sits flanked by 2 guards.  Apparently military service is compulsory for all young men in Taiwan but I hear that most cadets finish their service without knowing how to load or fire a rifle (not sure how accurate that is, though).  I also heard that the requirements for being a guard at the memorial are that one must be tall as well as handsome; whether that is true or not, let’s just say that the guards we saw here and during the ceremony did not look as though they go through the rigorous physical training of US and some European soldiers.  Having said that, they did do some nice footwork and handwork with the changing of the guard ceremony, though!

The changing of the guard occurs every hour and it is a very elaborate and lengthy ceremony.  We caught the beginning of it but soon tired of it and headed back down the steps before the ceremony ended and the mob of tourists watching it decided to leave. 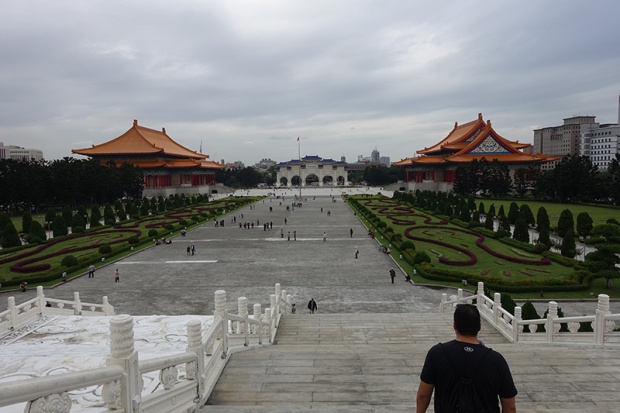 The park truly is massive.  This is a panorama view from the top of the Memorial Hall’s steps (click on the image for a higher resolution).

The building on the left is the National Theater where we entered the square.  The square itself has been the setting of many pro-democracy protests, which helped form the Taiwan of today.

After the visit to the memorial hall, we headed back to the tailor we visited earlier in the week to make the final decisions on the suits to buy.  Since I didn’t get a photo of the shopfront before, here it is from the street view.

Once again the proprietor and his staff could not have been more helpful and kind.  I’m looking forward to seeing how the suits turn out!

As the sun started to set, we headed for the Maokong Gondola to climb the mountains outside of Taipei and have dinner with a view of the city.

Yes, Hello Kitty is indeed *everywhere*.  We waited in a special line for a Crystal car, which was every 4th or 5th car.  What is the crystal Gondola?  Well, take a look: 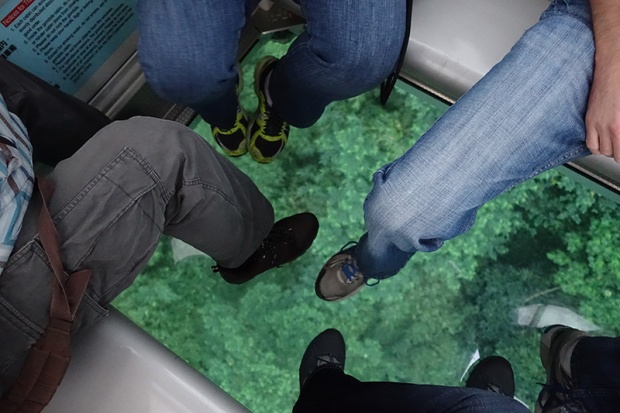 This Gondola has a glass floor so you can look down as you ascend/descend the mountain.  Here is a view from near the base of the mountain. 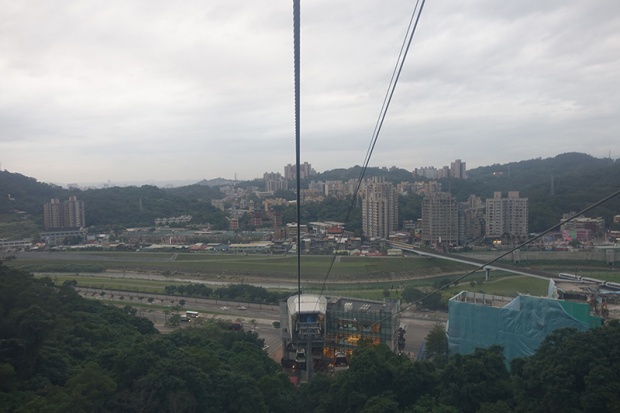 You can see that it is still reasonably light out.  We could catch a glimpse of the Taipei 101 tower as well. 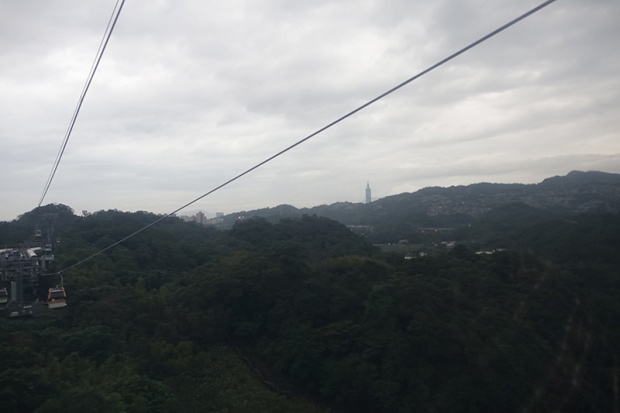 The entire trip lasted for more than 30 minutes and in that time the sun set and the lights of the city came on. 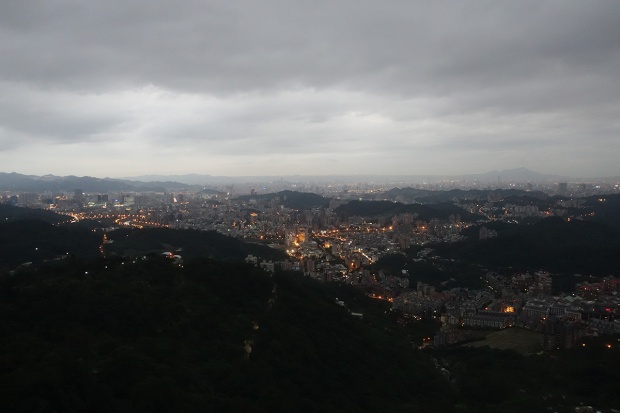 The Gondola makes 3 stops and also goes through 2 stations (no stops), one of which turns the track 90 degrees.  The Gondolas go up and down over different terrain so there was always something to see.  Here is a shot of the darkening sky with the silhouette of a temple in the foreground.

By the time we reached the top, night had fallen and we trekked a bit up the hill to a small town to have dinner. 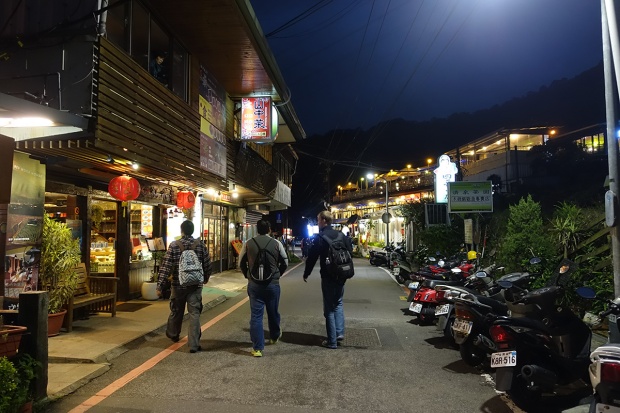 We ate at Red Wood House, a tea house with a covered patio where we had a spectacular view of Taipei.

We could see the Taipei 101 tower easily in the night sky. 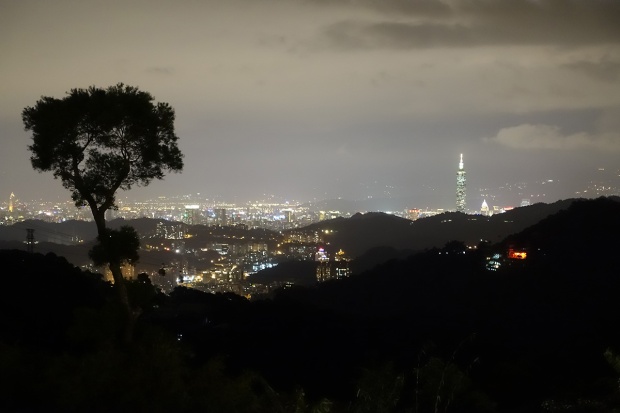 Now, if this was back home in the Bay Area, dining at a restaurant with such a great view would mean that the food would be as expensive as it was lackluster.  However, the food at this tea house was very, very good.  This is just a glimpse of what we started with. 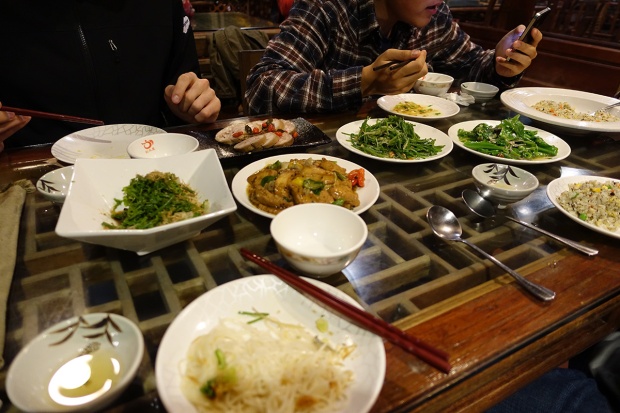 Everything was great, including the tea, of course.  Sadly, we eventually had to say goodbye to the tea house and head back down the mountain.

Before I end this post, I’ll just say that there probably is something to this site based on what we saw on the Gondola on our way back.

I realize the “O” in Hello Kitty is artistic here but…